Some people assume that, when Reshan Richards and I talk or write about blending leadership, we’re pushing people to use technology more frequently.  To set the record straight, we favor technology only when it helps leaders do their jobs in ways that are more human and more joyful.  Even efficiency, which can cut out the human all together, should be done with the intention of opening up space and time for richer interactions and more meaningful work.

Here’s a nice example that happens to be a technological example.  Recently, I sent an email to one of my Trello boards.  Almost immediately, I received an email in return: 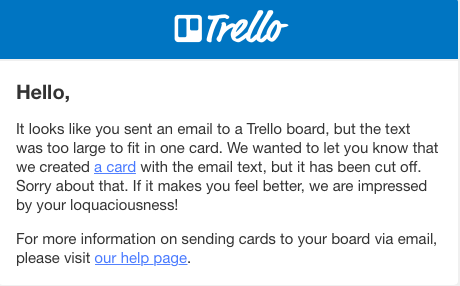 I figure this email came from some kind of Trello bot, not a real person — and was triggered automatically. But . . . whoever programmed the exchange demonstrated sound blended leadership.  First, he or she solved a reoccurring problem once, and then figured out a way to automate the response.  My hope is that this freed up time for Trello to make its great product even better.  Second, he or she took the time to interject some personality  — “we are impressed by your loquaciousness” — into an otherwise mechanical exchange.   Third, and finally, the link in the second paragraph empowers me, as the user, to fix my mistake if it really bothers me.

This is a small (and fine) example of blended leadership in the wild.  My book on the subject (coauthored with Reshan) isn’t out until July, but I’ll keep collecting examples as I encounter them in my daily work and life.

Today I attended the first meeting of a new committee.  I have been on dozens of committees, but the leader of this particular committee started his committee in a way that demonstrated outstanding leadership.  He said three things that I have paraphrased below.

This blog post is dedicated to my colleague, Meg.  We’ve been having a wonderful conversation (okay, debate) about the difference between “perfect work” and work that produces a “minimum viable product.” Can you guess which side I’m on?

A lot of my job these days involves strategic planning — making sure that my school is using its resources to move in the right directions.  The hope, in strategic work, is that preparation, thought, and discipline can ensure that an organization prospers while avoiding the vicissitudes of daily life / business.

Here’s a quotation from today’s Writer’s Almanac that describes one such important moment from the history of Blues music.

[Muddy] Waters tried to break through with his Mississippi blues, but he had a hard time playing loud enough for anyone to hear him on his acoustic guitar at the noisy parties and bars where he played. So in 1944, he bought a cheap electric guitar from his uncle, which helped increase his sound level.

It was the first time anyone had played Mississippi blues on an electric guitar, which revolutionized the sound of the blues.

If Muddy Waters would have stuck stubbornly to some kind of acoustic strategy, who knows what would have happened to the Blues.  Instead, he solved his most pressing local problem — his immediate audience couldn’t hear him — with an imperfect solution — a “cheap guitar from his uncle” — that allowed him to go one step further, to play one more show . . . and then another, and another, until, in his words . . .

All of a sudden, I became Muddy Waters, you know? People started speakin’, hollerin’ across streets at me.

Such magic happens “slowly, then all at once” — and sometimes only after grabbing the cheap guitar instead of waiting around for the perfect one.